One day in 2005, I was playing with some LEGO toys we have around the house, and I had an idea for making the most out of them: 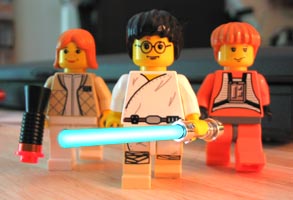 I've wanted to do some kind of crossover between Harry Potter and Star Wars for a while now, because I've really enjoyed the Potter books and ... well, I haven't enjoyed the last batch of Star Wars films nearly as much (though Revenge of the Sith was okay). I think the the Potter series would be great source material for a fun and exciting Star Wars campaign.

Such a crossover is made easier in part because the main characters between the two stories are so similar. Harry is Luke, of course, the boy who will save the World as We Know It. Ron and Hermione are Han and Leia, the best buddies who are there when our hero needs them (and are developing their own relationship). Dumbledore is Obi-Wan, Voldemort is the Dark Jedi or Sith Lord of your choice, and so forth. Many of the setting elements translate easily as well - Quidditch players would ride swoops or speeder bikes instead of brooms, for example.

I'd say that if you wanted to keep in the spirit of the books, such a crossover campaign would best be set before or after the Empire - no worries of Harry & Co. having to fight off the Emperor's lackeys and Slytherin House at the same time. A campaign set during the Rebellion Era, though, could be an interesting alternative for a "darker," more adult tone. Instead of coming to Hogwarts as mere students, they could be refugees and fugitives from Imperial justice. Hmm....

I've written up stats for Harry, Hermione and Ron for the Star Wars D6 Second Edition Revised & Expanded game (the one with the Millenium Falcon on the cover), but d20 stats should be easy to figure out.

Star Wars and all related indicia are © Lucasfilm Ltd.
Harry Potter and all related indicia are © Warner Brothers Entertainment Inc. and J.K. Rowling.
And for good measure, LEGO© is a trademark of the LEGO Group of companies which does not sponsor, authorize or endorse this site.
The use and reference of these copyrights in this publication are not intended as challenges to said copyrights.

Back to Banzaidyne Press Articles